ABOUT
Despite recent and surprisingly rapid modernization, Botswana’s cities provide little in the way of tourist attractions. However, what the cities lack in excitement, the surrounding wilderness areas more than make up for in outstanding natural beauty. The country’s primary tourist draw card is undoubtedly the vast expanse of the Kalahari desert and its remarkably beautiful Okavango Delta – the largest inland delta in the world, which provides a haven for an abundance of African wildlife. Other highlights include the impressive Makgadikgadi salt pans where visitors are privy to massive zebra migrations during the flood season, the Savuti plains which host large prides of lions and the Tsodilo Hills where 4500 rock paintings form a unique record of human settlement over many millennia.

OKAVANGO DELTA
The Okavango Delta is the earth’s largest inland water system. Its headwaters start in Angola’s western highlands where numerous tributaries join to form the Cubango River. It then flows through Namibia, where it is called the Kavango and finally enters Botswana, where it becomes the Okavango.  Millions of years ago the Okavango River flowed into a large inland lake called Lake Makgadikgadi (now Makgadikgadi Pans). Tectonic shifts interrupted the flow of the river forming what is now the Okavango Delta, a unique system of waterways that support a vast array of animal and plant life, in what would have otherwise been dry Kalahari savannah.
Highlights include the elusive Sitatunga antelope which has found refuge in this pristine wetland ecosystem, while birds such as the African Fish Eagle, Pel’s Fishing Owl and many others, provide a spectacular display.

MAKGADIKGADI PAN
The Makgadikgadi Pan is the world’s largest salt pan, formed on the bed of an ancient lake that began evaporating aeons ago. Visiting Makgadikgadi is a unique desert experience – in the dry season, this vast expanse of sun-baked salt glistens in the light and when the rains come, the pan is home to a cornucopia of flamingos and other waterbirds, as well as one of Africa’s biggest zebra populations, whose annual migration is a wonder to behold.

CHOBE NATIONAL PARK
The Chobe River forms the northern boundary of the Chobe National Park, renowned for its reliable and diverse game viewing. Safaris are conducted both by boat and on land. This section of the park is best known for its elephant and hippo populations, but the waters attract all manner of game including large herds of buffalo and the lions that prey on them.

SELINDA RESERVE
This 320,00-acre reserve is in northern Botswana – west (upstream) from Savute Channel and Chobe National Park and north of the expanding reaches of the greater Okavango Delta. This unique position gives it the advantages of both of these famous areas but with the tremendous advantage of exclusivity. It is a truly spectacular and varied landscape hosting a wide range of species in diverse habitats. It is particularly well-known for its African Wild Dogs, large elephant herds and the rare Roan and Sable Antelopes.

MOREMI GAME RESERVE
In the heart of the Delta is the Moremi Game Reserve. Established by the BaTawna people to help preserve the region’s wildlife, today Moremi supports one of the greatest concentrations of wildlife in Africa, including endangered wild dog and huge herds of elephant. Buffalo, lion, leopard and cheetah are also common in the region. The birdlife is prolific with waterfowl and waders being particularly common.

This diversity supports an incredibly wide spectrum of wildlife, ranging from large herds of buffalo, wildebeest and zebra, to the rare Sitatunga and Lechwe antelope and lion, cheetah and packs of wild dog in the open grasslands. The birdlife is prolific and includes most of the 550 bird species recorded on the Botswana national bird list. A range of luxury lodges in the reserve offer visitors the perfect base to experience this corner of paradise.

KHWAI COMMUNITY AREA
The Khwai area of the Okavango lies along the northern boundary of the Moremi Game Reserve. This is an unfenced boundary, allowing wildlife to move freely between the woodlands in the wet season when water is plentiful and back to permanent rivers and lagoons in the dry season. The Khwai area offers the same wildlife experience as the reserve, with the added advantage of being a private concession, allowing the ability to do walking safaris and night drives.

SAVUTI-CHOBE NATIONAL PARK
In an isolated part of the Linyanti Concession in northern Botswana is the famous Savuti Channel. Between 1980 and 2008 the Savuti Channel ceased to flow, creating an unusually productive ribbon of grassland. This served as a corridor and feeding ground for a variety of herbivores between the surrounding woodlands. In 2008, the Savuti Channel once more became a deep, clear waterway harboring hippo and aquatic life, with a myriad of water birds. The Savuti Channel is also known for large numbers of elephants and predators, especially lion and hyena.
It is impossible to say how long this flow of the Savuti Channel will last. If the next summer rains are disappointing, it will begin to recede. For now, however, you have private and exclusive access to the abundant game and the natural and geological changes that are occurring on a daily and seasonal basis.

This prime game viewing area is bordered to the north by the Linyanti River and the east by the Chobe National Park.  There are excellent grasslands and waterholes along the Savuti Channel and the Linyanti River. Inland there are enormous acacia and mopane forests, which sustain large numbers of elephants. In fact, the area is renowned for its dense elephant population and for some of the best elephant viewing anywhere in Africa in the winter months.  Zebra, buffalo, lion, wild dog, hyena, monkey, baboon, hippo and crocodile are also among the more concentrated game.

on your vacation and safari journey! 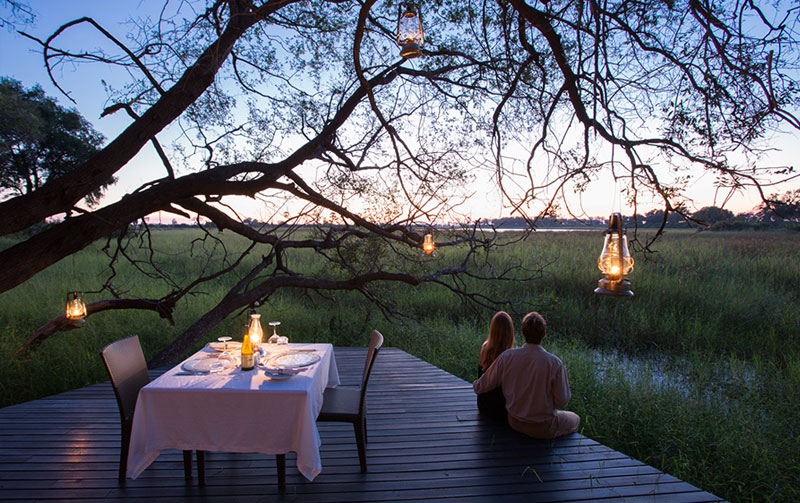 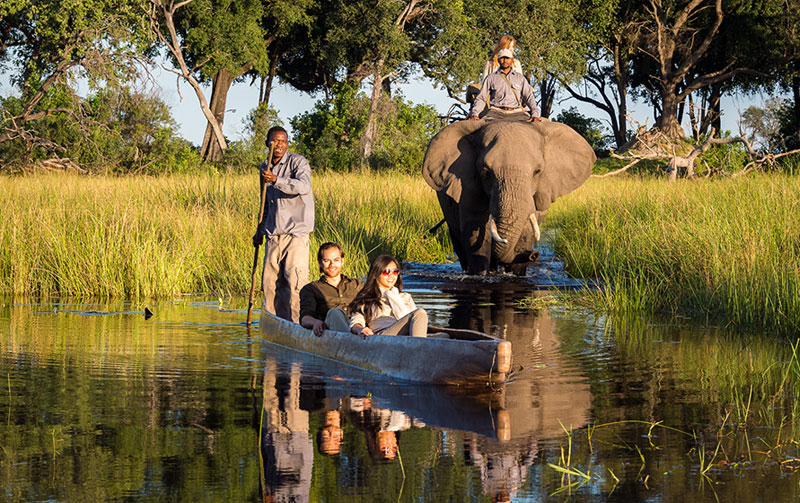 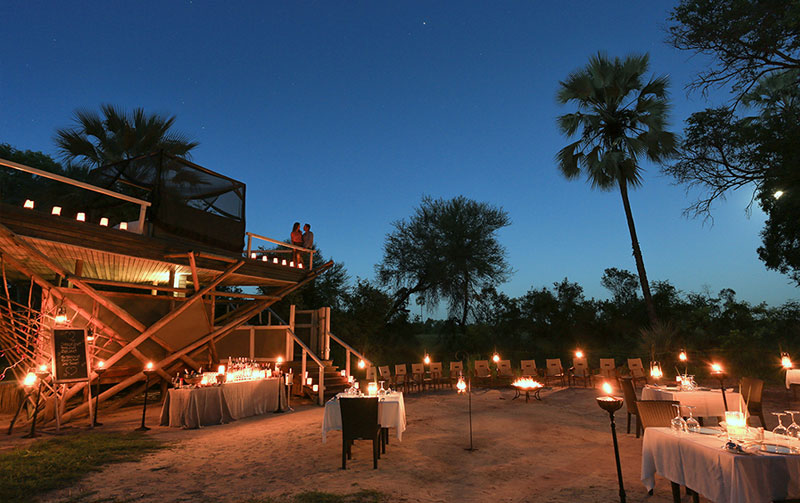 Let us craft the perfect Botswana experience for you.
BOOK NOW