We were so happy to have Jen submit some photos for us again. Based in Canada, Jen lives, eats and breathes the essence of Africa more than most locals I know. Her passion, commitment and care towards conservation in Africa and her people is truly inspiring and contagious. Make yourself a cuppa and enjoy this visual journey of a day on an African safari.
“My friend Mark has given me the opportunity to share some of my images in his Armchair Safari series.  I wasn’t given any parameters that I had to follow, and at first struggled a little bit with what I would say, and what images I would share.  I’ve been incredibly fortunate to have taken 6 trips to Africa and have a fairly big catalogue of images and a wealth of stories.
There’s a tendency to want to share the most iconic shots, the highlight reel of a trip.  But for me, that isn’t the only thing a safari is about.  It’s the experience of being out in nature, of driving along and seeing what you see, without a big agenda.  It’s the thrill of the chase, regardless of whether you capture a sighting or not.  It’s the tiny twittering birds and the huge towering elephants, the sunrises and sunsets, the wind and sun (and sometimes rain) on your skin as you immerse yourself in nature.  It’s also delicious meals and making new friends and a feeling of ease that can’t quite be described.
I decided that I wanted to create a post from sunrise to sunset, but limited to only the last trip that I took to South Africa in May 2019.  My mind initially started racing in a million directions with ideas to incorporate images from multiple trips, but instead I am going to keep it simple.  These images were taken over several different days at different camps; most while out on game drive, though the mid day photos were all shot in camp.
I hope you enjoy!” 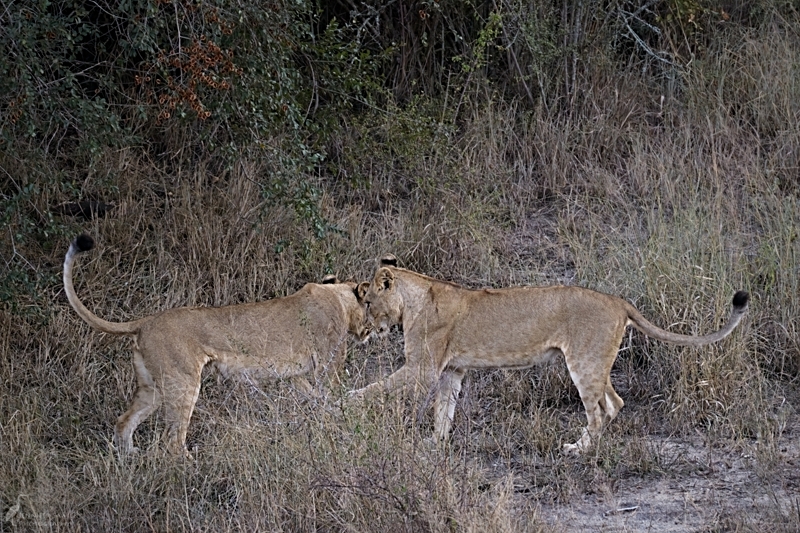 6am – Lions. Two of the Torchwood Pride greet each other. 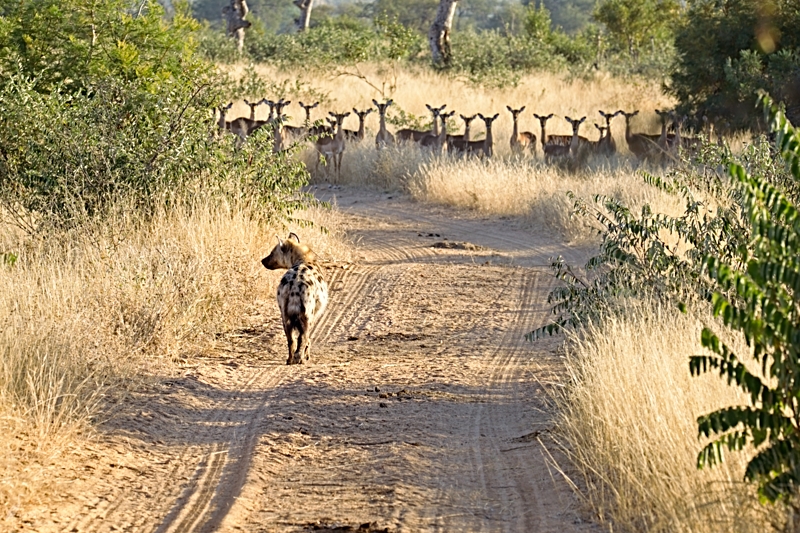 7am – Hyena and Impala. A group of Impala look on warily as a Hyena approaches down the road. 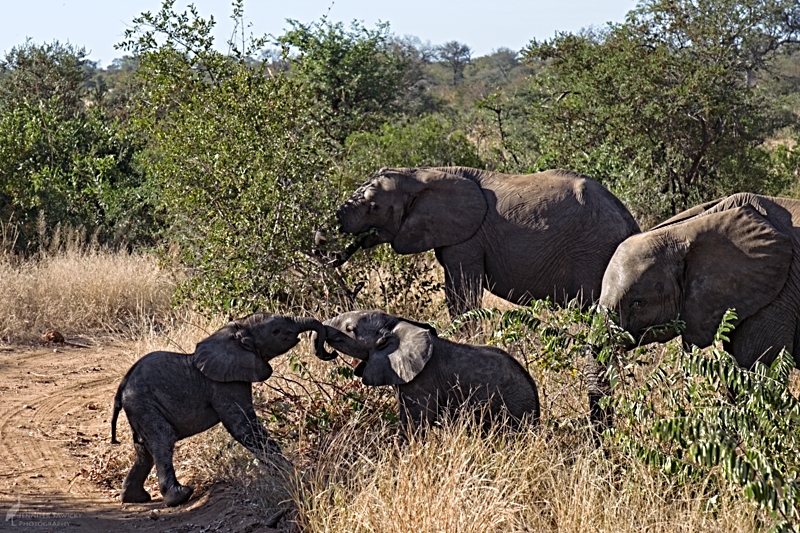 8am – Elephants. A pair of youngsters tussle while the older elephants graze nearby. 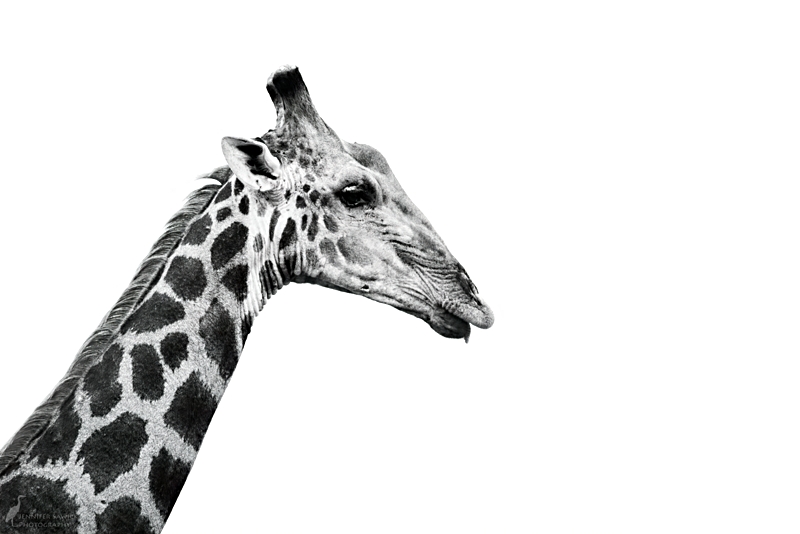 9am – Giraffe. A giraffe bull paused in the road allowing me to capture this image while on the way back to camp for breakfast. 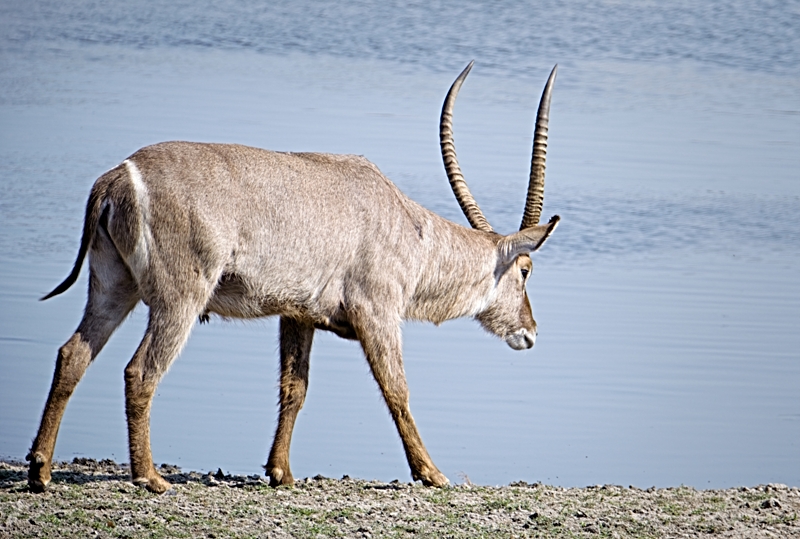 10am – Waterbuck. A Waterbuck heads to the dam for a drink. 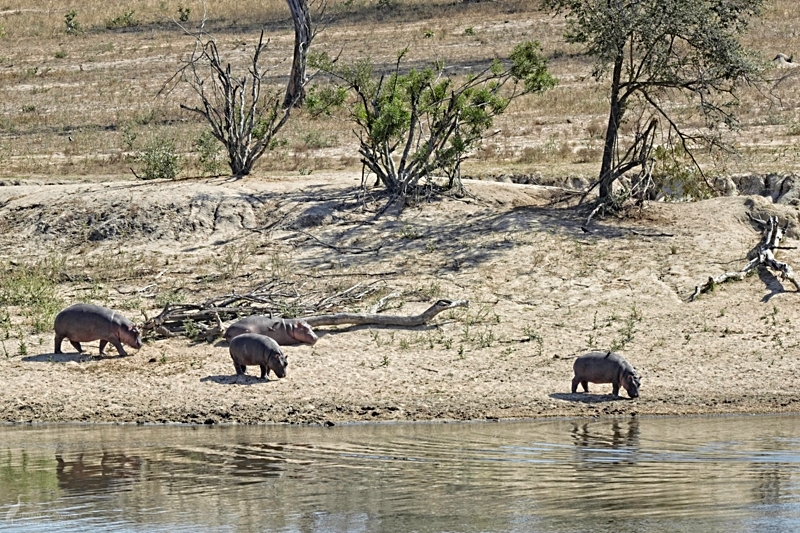 11am – Hippos. A group of Hippos head back to the water to beat the midday heat. 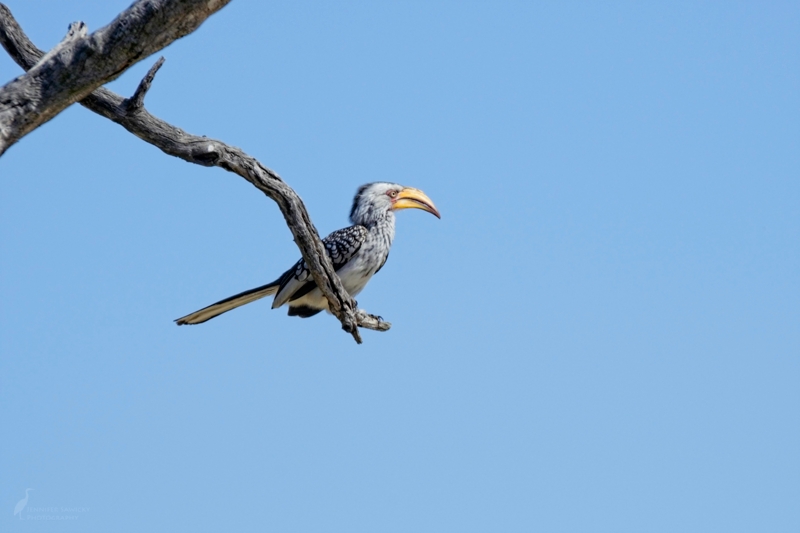 12pm – Hornbill. A flying banana perched just beyond the deck at camp. 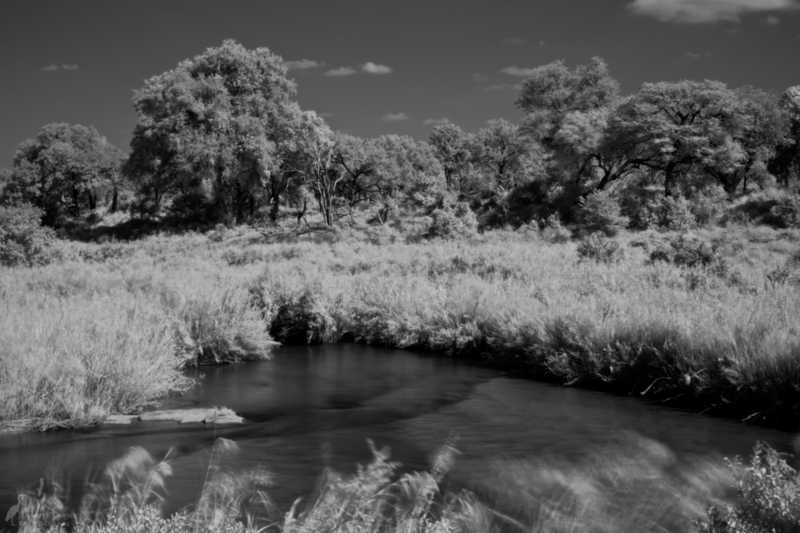 1pm – Infrared Landscape. Midday was a great time to wander around camp with my infrared filter and play around with long exposure photos. This was shot from the deck at Lions Sands Tinga Lodge. 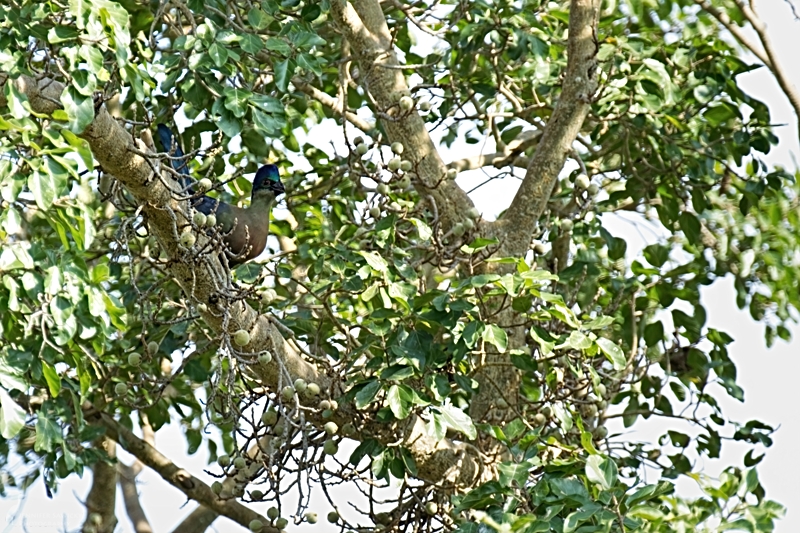 2pm – Purple Crested Turaco. I tried for ages to capture good image of this beautiful bird from my balcony, but given that they like to be deep in the branches, it really wasn’t meant to be. It was a fun way to spend part of the afternoon though. 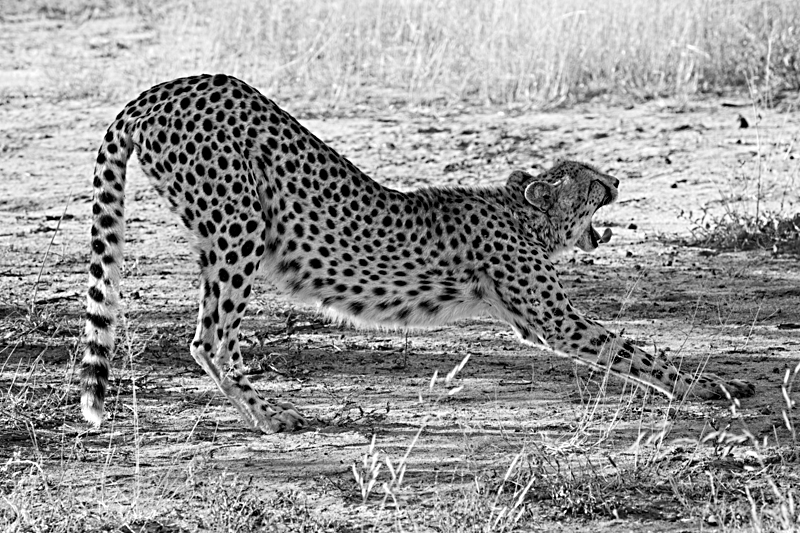 3pm – Cheetah. We’d only been out on a game drive for about 10 minutes when we came across this cheetah, and the chance to watch her stalking some impala. They spotted her right away so supper was not in her immediate future. 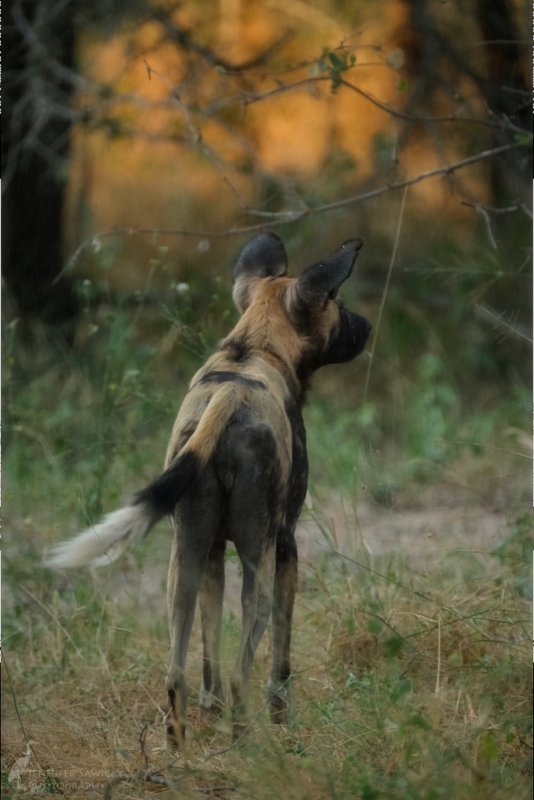 4pm – Wild Dog. Spending time with wild dogs always makes my heart happy. We had a good half an hour with them before they took off in all directions, setting out to hunt. 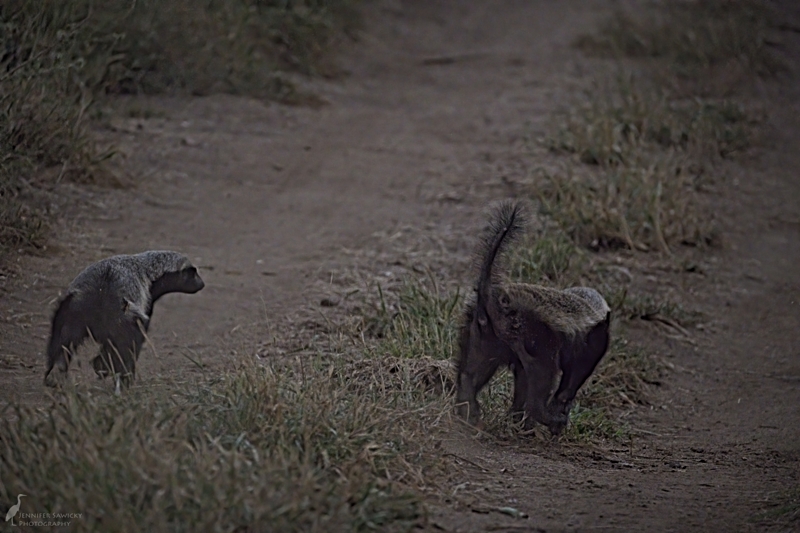 5pm – Honey Badgers. I had always wanted to see honey badgers and on my first game drive of the trip I finally had my chance. It only lasted about 30 seconds but it certainly was thrilling, even if all I could get were butt shots! 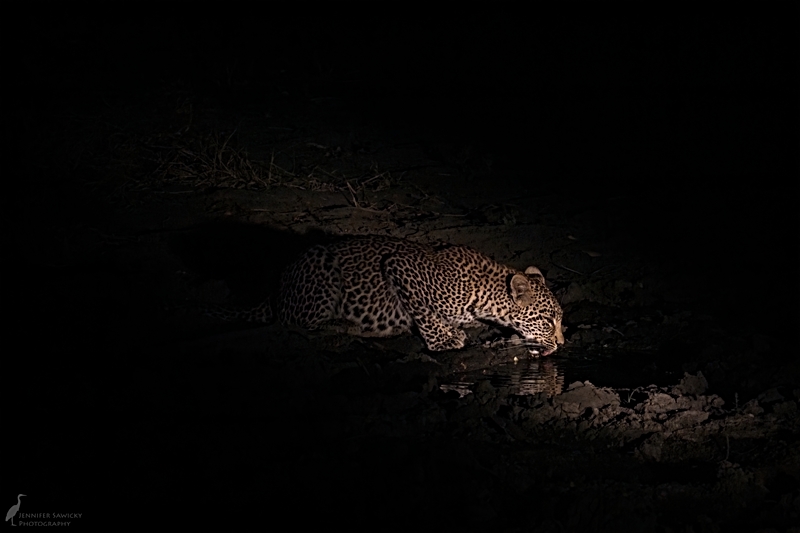 6pm – Leopard. We were heading back to camp for drinks and dinner and came across this leopard heading in to this large puddle to drink. It was a quick stop before the leopard was on its way.